Why You Should Be Getting More Vitamin D

Pasty-skinned Brits got their knickers in a collective knot recently after health officials advised that all Brits should add a daily vitamin D supplement to their diet in the fall and winter.

Public Health England — the U.K. version of the CDC — cited new data to explain the move, noting that people are most likely not getting enough of the “sunshine vitamin.” Of course, social media skeptics took to their respective platforms with torches and pitchforks to rant about how the recommendations are just a ploy for pill makers to make more money.

Whether you believe that vitamin D deficiency is a worldwide pandemic or if it’s a crock of vitamin BS, there’s no doubt that vitamin D is an important part of a maintaining a healthy lifestyle.

What Is Vitamin D and Why Do I Need It?

The vitamin is necessary for the body to regulate phosphate and calcium levels, as well as promote calcium absorption. This, in turn, helps keep your muscles, teeth, and bones strong.

And then there are the claims that the vitamin can also do even more super amazing things. A 2014 review of studies on vitamin D looked into 137 claims involving the vitamin and its role in fighting or warding off various illnesses. However, the findings were inconclusive and suggested that more analysis is needed before such claims are taken as gospel.

Do You Need More Vitamin D?

A blood test is the only way to know if your vitamin D levels are optimal or not, and if you need more.

The Brits’ suggested 10 mcg/day (or 400 IUs) is on the low end of the 400–600 IUs the National Institutes of Health recommends for American adults. The National Academy of Medicine (formerly the Institute of Medicine) also advises 600 IUs per day for people aged 1–70.

(Fun Fact of the Day: “IU” stands for “international unit,” which is how many vitamins are measured.)

In fact, some experts believe the 600 IU target isn’t enough. But overall, the consensus is that getting more is safe so long as it’s less than 4,000 IU per day. Taking in too much — aka, vitamin D toxicity — may lead to side effects, so talk to your doctor about the right dosage for you.

3 Ways to Get More Vitamin D 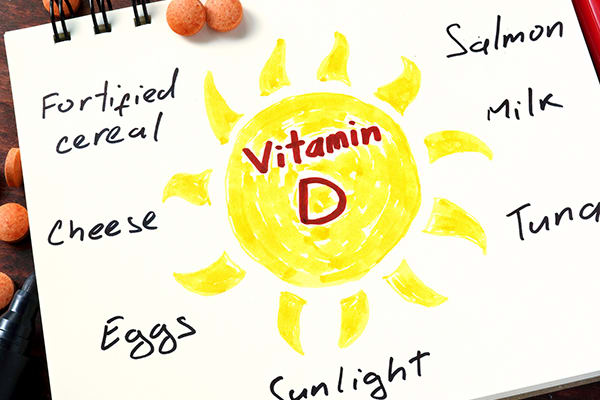 Eat Your Vitamin D
Certain foods are packed with vitamin D, so getting more IUs can be as simple as adding more of these foods to your diet. Topping the list of vitamin D-rich foods: a tablespoon of cod liver oil (yum!) has a whopping 1,360 IUs.

If a spoonful of oil doesn’t go down easy, swordfish (558 IUs), salmon (435 IUs), a can of tuna (148 IUs), and a cup of milk (120 IUs) fortified with vitamin D round out the rest of the top five foods high in vitamin D. Mackerel, eggs (with yolks), and canned sardines provide smaller amounts.

For vegetarians and vegans, it may be challenging — but not impossible — to get enough, as the best sources are fatty fish and other animal-derived foods. Non-animal options include certain mushrooms, as well as fortified cereals and soy products like tofu. That said, it’s generally a good idea for vegans to supplement. Need more ideas? You can look up the nutrients of almost any food in the Department of Agriculture’s Nutrient Database.

Take Your Supplements
When you reach for a vitamin D supplement, you’ll also notice two options: vitamin D2 (ergocalciferol) and vitamin D3 (cholecalciferol). D2 is from non-animal sources and D3 comes from sunlight exposure and foods derived from animals. Typically, D3 is what you’re after — a study analysis shows that D3 is more effective at raising vitamin D levels than D2.

Getting your levels tested is the only sure-fire way to know precisely how many IUs you need.

Catch More Rays
UVB radiation from the sun sparks vitamin D production and experts say just 10–15 minutes of sun a few times a week can help you meet your vitamin D target. But as the Brits can attest, UVB rays are weaker the farther you are from the equator, hence the vitamin D supplement recommendation.

For folks who live under sunnier skies, this option can be a “damned if you do, damned if you don’t” option. Getting more sun may spark concerns about skin exposure to that big fireball in the sky, so you may want to stick with foods and supplements if you don’t want run the risks.

One last thing: UVB rays don’t penetrate glass, so hugging a window at work or sunning yourself in the car with the A/C running doesn’t count toward your daily D intake.