Are Dates Actually Good for You?

Tennis player Novak Djokovic has been known to snack on dates courtside to power up between matches. Vegan bakers have embraced these chewy wonders as a base for healthy confections from protein balls to cookies. And since they’re a whole food with numerous benefits, dates are also among the list of Sugar Free 3-approved foods.

But dates are also among the sweetest fruits on the planet — can they really be healthy?

Indeed they can — if you eat them mindfully. A typical medjool date contains 67 calories, 2 grams of fiber, and 16 grams of sugar, that last ingredient being equivalent to about half a Baby Ruth bar. The difference here is natural vs. added sugar: date sugar occurs naturally, imparting other nutrients that help your body better process that sugar.

Here are the chief benefits of eating dates.

A 100-gram serving — roughly four medjool dates — packs 7 grams of fiber. “That is significant when you consider that most adults don’t meet the recommendation of 28 to 35 grams of fiber daily,” says Malina Malkani, MS, RDN, CDN, media spokesperson for the Academy of Nutrition and Dietetics and author of Solve Picky Eating. “Fiber is an important nutrient that supports digestive and cardiovascular health and increases feelings of fullness after eating.” 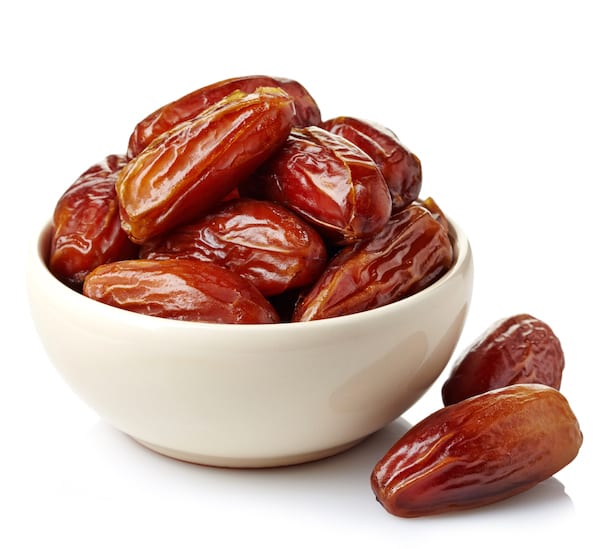 Although dates are super-sweet, you likely won’t experience a sugar rush and crash. “Given their relatively high sugar content, people might expect that eating dates will cause a rapid and significant rise in blood sugar,” says Malkani. “However, their high fiber content seems to offset this effect.”

3. They May Help Keep You Regular

But keep in mind, on the flipside, plowing through too many dates could also cause GI distress, says McMordie. “It’s best to limit the amount of dates eaten at one time to avoid digestive discomfort.” (Which is a dietitian’s nice way of saying “the runs.”)

“Dates contain essential vitamins and minerals that support optimal health, including potassium, magnesium, and vitamin B6,” says Malkani. On average, a serving of dates has 5 percent of the daily value (DV) of calcium, 13 percent DV of magnesium, and 15 percent DV of potassium. During exercise, potassium helps prevent muscle cramps and fatigue — and like fiber, many of us may not be getting enough of it. 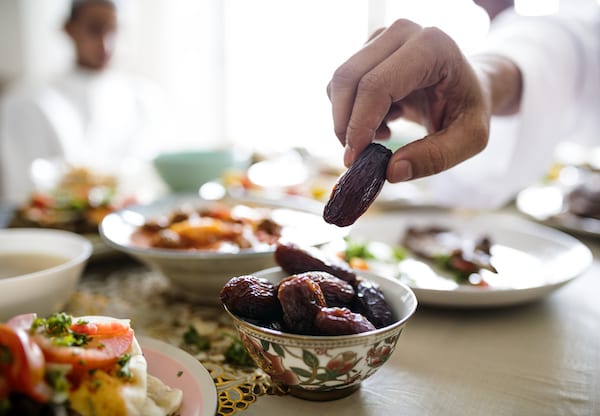 It’s a myth that following a vegan diet will make you iron deficient. However, dietitians do recommend that vegans and vegetarians increase their iron intake, and have iron levels followed by their health care providers, since plant-based iron is absorbed differently by the body than its animal-derived equivalent. That makes the 5 percent DV of iron in dates awfully handy.

6. They May Help Power Your Workouts

“Since dates are naturally high in sugar and calories, they’re great to eat when you need a quick burst of energy, such as before a morning workout or as an afternoon snack,” says McMordie. She adds there’s not necessarily a bad time to eat dates, but they’re probably most beneficial when you need some extra fuel during the day. Pair with an ounce of cheese, or along side a handful of almonds to round out your macros.

“Besides their impressive fiber and micronutrient content, dates are a healthier alternative to refined white sugar in desserts,” says Malkani. Their gooeyness also makes them a good substitute for eggs when holding together recipes like cookies, energy balls, and bars.

Can You Eat Too Many Dates? 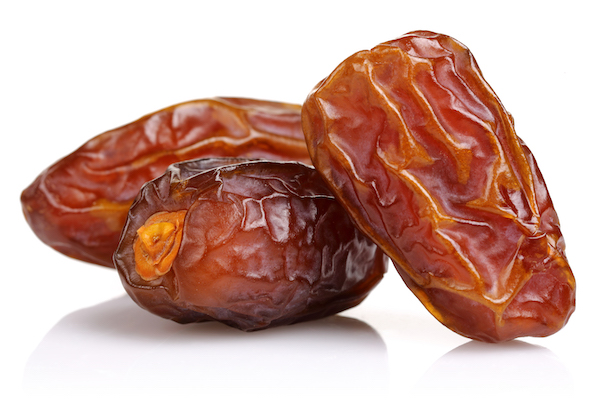 “Yes. It’s possible to eat too much of any food, including dates,” Malkani explains. “It’s important to note that dried dates are higher in calories than fresh or frozen fruit because they’re dried, making them more calorie-dense and therefore best eaten in moderation.” But, it’s generally safe to eat a few dates every day as part of a balanced diet.

Where Do Dates Come From?

If you’re curious about what dates look like before they wrinkle up, you may find fresh dates, which grow in bunches like grapes on stems, at farmers’ markets or specialty grocery stores during the fall when they’re in season. As they dry, they become sweeter and softer.

Dates grow best in hot, dry climates, such as the Middle East and North Africa, where they’ve been staples of sweet and savory foods for hundreds of years. Domestically, 90 percent of dates are grown in California’s Coachella Valley.

The most common varieties you’ll find in the U.S. are medjool and deglet noor. However there are literally hundreds of types in other parts of the world. Dried medjool dates are especially popular for their size, texture, and rich, caramel-like flavor.