This Is the Best Time to Eat a Banana

Bananas are currently the most popular fruit in America* and are regularly held up as the epitome of a healthy on-the-go snack and the ultimate portable workout fuel.

Tennis players munch on them during matches, marathon organizers dish them out by the bunch at races, and they’re a workout staple for anyone wanting to keep fast energy close at hand. They’re as much a part of working out as overzealous coaches screaming “you can do it!” when in all honesty, you feel like you definitely can’t.

But are our yellow-peeled friends all they’re cracked up to be? And what makes these bendy yellow fruits so popular? We spoke to nutritionists, dietitians, and food experts to find out.

“Bananas are a great healthy snack,” says Mitzi Dulan, R.D., Team Nutritionist for the Kansas City Royals. “They are a good source of unrefined carbohydrates, which means fuel for your muscles, and also provide a good amount of potassium.

The Dietary Guidelines for Americans recommends 4,700 milligrams of potassium per day for adults. Most American adults get only half of that. But, a single medium-sized banana contains around 420 milligrams, which makes them an easy way to help you boost your daily intake.

Bananas can also provide a much-needed kick in the pants when you feel yourself faltering during a workout. Anti-aging food and fitness nutritionist Rick Hay says, “Bananas are a fantastic source of sustainable, caffeine-free energy to help with sports performance.” 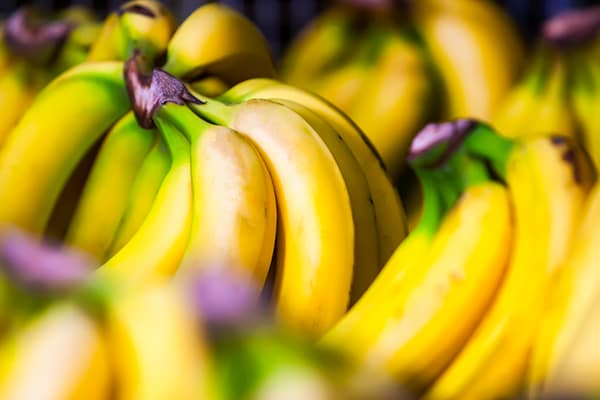 Are Too Many Bananas Bad for You?

As King Midas learned the hard way, you can have too much of a good thing.

“It is possible to [eat] too many bananas, especially if you are trying to manage your weight,” says Hay, who points out that a large banana contains roughly 120 calories.

But don’t pay attention to the old myth that eating too many bananas in one sitting is a recipe for certain death. “It would be impossible to overdose on bananas,” says Catherine Collins, a dietitian at St. George’s Hospital in London. “You would probably need around 400 bananas a day to build up dangerous potassium levels. Bananas are not dangerous. They are, and always have been, very good for you.” For perspective, to eat 400 bananas in a day, you’d have to eat 3.6 bananas every minute.

That said, too much potassium may be harmful to the elderly or those with kidney disorders. It’s always worth checking with your doctor before making any big changes to your diet. As with most foods, moderation is the best policy. “I’d stick to one or two a day,” says Dulan.

When Is the Best – and Worst – Time to Eat a Banana?

“They can be used before, during, or immediately after exercise or simply as a nutritious snack at any point during the day,” says Dulan.

“Eating right before exercise could diminish your performance as the body redirects its focus away from muscles to digestion,” says Hay. “I recommend eating 30 minutes to an hour before exercise to make sure the nutrients are digested and available for your body to utilize.”

Are All Bananas the Same?

There are around 1,000 varieties of banana, although only half are edible. While more adventurous banana eaters may also have sampled the red banana, the Macho banana, and plantains, by far the most common is the Cavendish banana, which constitutes around 95 percent of commercially-sold bananas. The Cavendish banana also provides a good dose of potassium and contains less sugar than other varieties. This, along with its availability and taste, makes it the king of bananas.

(Breaking banana news: The Cavendish variety is being threatened by a fungus that wiped out the previous most common banana, the Gros Michel.) 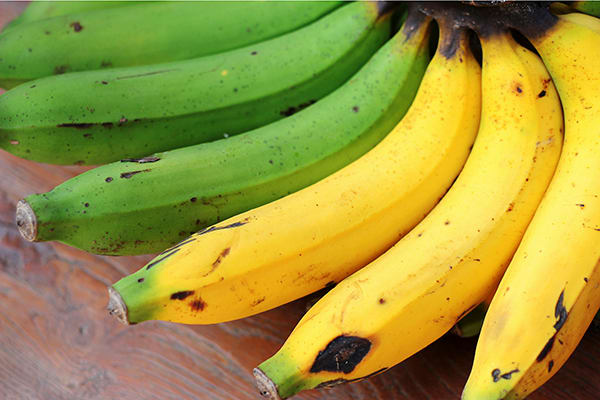 Are Ripe or Unripe Bananas Healthier?

The nutritional profile of a banana changes as it ripens. You’ve probably noticed that the more ripe and yellow your banana is, the sweeter it tasters. This is because enzymes in the fruit’s tissues are breaking down starch into sugars. It’s also why brown bananas are so good in banana bread!

The breakdown makes a ripe banana easier to digest than a green one, but it also means you will absorb the sugars into your bloodstream more quickly, causing more of a spike in blood sugar. If you’re in the middle of an activity and need instant energy, this may be helpful, but if you want your energy delivered more evenly over a longer period, a less-ripe (not green!) banana may be better.

Tasty Ways to Up Your Banana Intake

“We love bananas,” says Leon Bustin, one half of YouTube food and fitness duo The Lean Machines. “They’re full of nutrients and incredibly versatile, but we think they’re best used immediately after a workout when your body is craving nutrients and a replenishment of energy.”

“We like to chop one up and freeze it overnight, [so it’s] ready to add to a post-workout smoothie the next morning. It adds a boost of calories and dietary fiber, as well as making the smoothie nice and cold and giving it a great texture. If your workout comes later in the day, try mashed banana on rice cakes or toast as a great post-workout snack.”

For more top banana recipe ideas and clever ways to get more of them in your diet, check out these easy recipes.