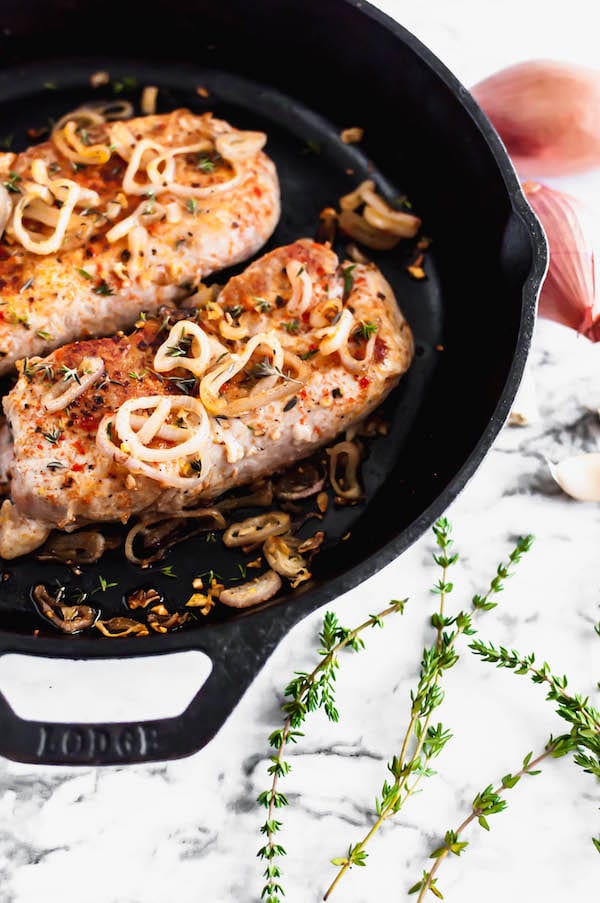 Lean cuts of meat are great for delivering hefty amounts of protein without extra fat, especially if you bake them. The challenge? Making them as juicy, tender, and flavorful as cuts of meat with more fat. Fortunately, you don’t need all that ribbon-y lard to make a tasty meal. Just look at the beloved baked pork chops!

If you’re wondering how to bake pork chops without drying them out, we’ve got you covered. Our Garlic and Shallot Baked Pork Chop is a great option for making delicious baked boneless pork chops with tons of flavor.

It only takes you 20 minutes from start to finish, and once prepared, it has offers up 236 calories, 8 grams of fat, and a whopping 33 grams of satisfying protein. 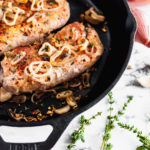 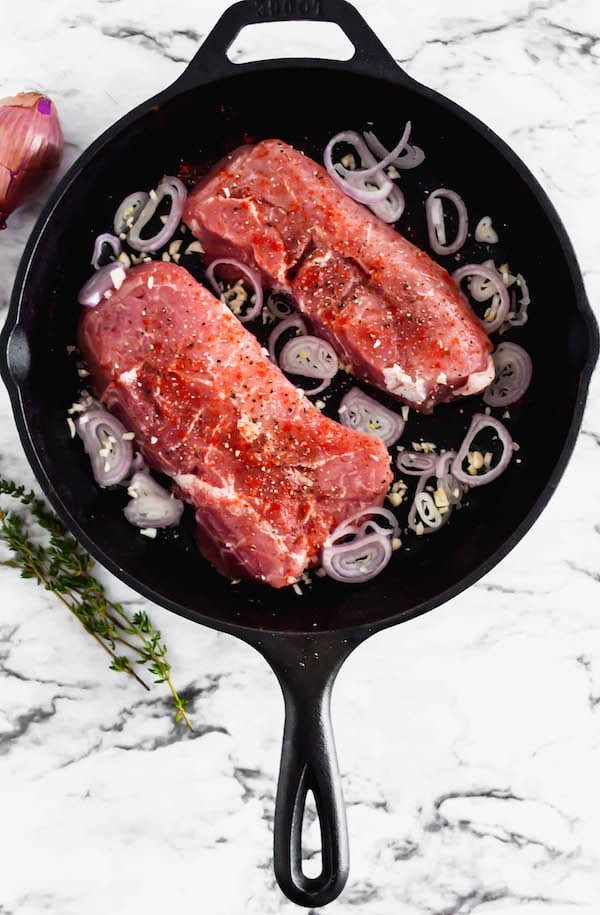 During the 1970s, health-conscious eaters stopped eating pork in large numbers because it was too fatty. So, the pork industry responded by improving the quality — a study released in 2006 by USDA, found that many common cuts of pork were leaner than they had been 15 years earlier.

As a result, some pork cuts are now as lean as skinless chicken breast. This famously led to the highly memorable “The Other White Meat” ad campaign in the late 1980s—although according to the USDA, pork is actually classified as a red meat even if it does get lighter in color when you cook it.

What Exactly Is a Pork Chop?

Pork chops are cut from the pork loin or the section running from the pig’s hip to shoulder. The thickness of a chop typically varies between a half inch to two inches. Your local butcher might also have different cuts similar to the style of beef steaks.

For our baked pork chops recipe, we recommend a five-ounce boneless pork chop. Like beef steaks, you can buy pork chops with the bone in or the bone out. We find the latter is more convenient for a quick meal you can dig right into.

How Long Should You Cook Pork Chops?

The National Pork Board recommends baking pork chops until they reach a 145-degree internal temperature. Whether it’s an old-school dial one or a digital display, having a meat thermometer is a handy tool for taking the guesswork out of safe meal prep.

With pork chops, overcooking them can make them dry, but you want to make sure they’re fully cooked, so follow our recommended cooking time and double-check the internal temp.

In addition to not over-baking your pork chops, there are a few other tricks to perfecting this dish.

The first step of our recipe is to season the chops with salt, pepper, and paprika. A bit later on, we also season them with shallot, garlic, and thyme to round out the flavor profile.

To keep our baked pork chop recipe super juicy, we sear it in ghee (AKA clarified butter) before popping it in the oven. Searing the chops takes a few extra minutes, but it’s totally worth it as it really locks in the flavor and the juices.

After you bake the pork chop in a pan for 12 minutes (no cover necessary), you may be tempted to dive right in. But have patience! Set it aside for five minutes to rest, and then tear in.