What Is the Average Walking Speed and Can You Improve It for Better Health? 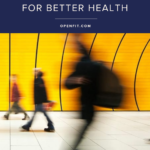 Form… duration… intensity — we dissect every aspect of the workouts we spend doing three to six hours a week. Yet we don’t dedicate nearly as much scrutiny to the moving we do the rest of the time — i.e., walking. For starters, if the average walking speed for healthy adults is roughly 3 mph, could you improve its benefits by a third simply by walking 4 mph?

Whether you’re looking to burn calories, improve flexibility, or you’re just curious about how your average walking speed stacks up to the typical human, here are some insights on how quickly people walk, and what that means for health.

Join a trainer and teammates in live classes with the Every Step walking program. Get it here!

What’s the Average Walking Speed for Men and Women?

And while it might be reasonable to assume men walk considerably faster than women on average, it isn’t necessarily so. Men and women walk at comparable speeds in their 20s, 30s, and 40s, with men averaging only slightly faster speeds during those decades (within 0.2 mph.)

In their 50s, 60s, and beyond, both men and women start to slow down. The gap between men and women widens until their 80s, when it narrows again. The following chart shows the differences in average walking speeds for men and women through the decades. But while the brisk pace of a 40-something doesn’t last forever, the slowdown isn’t as drastic a difference as you may think: Even 70-somethings truck along at more than 2.5 mph.

Brisk vs. Slow Walking for Health and Weight Loss

For people who are very overweight or elderly, walking is a great way to start losing fat and improving fitness. And walking speed is “a predictor of important outcomes” especially as we get older, according to a meta-analysis published in the British journal Physiotherapy. Researchers have even referred to it as the “6th vital sign.”

But while it may be gratifying to clock your speed and find that you’re trucking along faster than average, there’s no one-size-fits-all benchmark for walking speed. “It’s very much dependent on age, heart rate, and level of fitness,” explains Dr. Bianca Beldini, DPT and co-founder of Sundala Wellness in New York City.

(It’s important to note that, while it’s called the “fat-burning zone,” it’s not actually the ideal zone for losing fat; rather it’s the zone in which fat is most used as an energy source during exercise. So while you might see results from walking initially, you’ll need to quickly increase the intensity of your workouts to continue losing fat and improving your fitness.)

Using the Karvonen formula, says Beldini, a 30-year-old’s max heart rate is 190 beats per minute (bpm). So he or she would want to stay between 114 and 133 bpm (60 to 70 percent) in order to build an aerobic base, improve cardiovascular function, and burn fat. A 55-year-old’s ideal zone, on the other hand, would fall somewhere between 99 and 116 bpm.

That’s not to say that slightly slower speeds are a waste of your time. Aerobic conditioning is important for cardiac function, circulation, and lymphatic movement. And you can still build an aerobic base between zone 1 and low zone 3, which is a bit slower than your “optimal” walking speed for weight loss and fat burning.

For a more accurate measurement of your ideal zone, Beldini suggests wearing a heart rate monitor or a watch-based heart rate tracker to chart bpm, rather than relying on your treadmill’s readout.

How Far Do Most People Walk in a Lifetime?

A recent study in the journal Nature found that Americans walk an average of 5,000 steps a day. Theoretically, if you took 5,000 steps every day throughout your entire life and lived until age 80, you’d walk nearly 146,000,000 steps in your lifetime. However, infants don’t come out of the womb walking, and humans typically walk less toward the end of their lives, so it’s likely that number is significantly lower for most of us.

What’s clear, though, is that we should be walking nearly double that amount. According to an international group of researchers, 10,000 steps per day, or about 5 miles, is a “reasonable target for healthy adults” — and most of us aren’t hitting it. So whether your motivation is weight loss, enjoying time in nature, staying limber, increasing energy, or just good ole bragging rights, the mandate is clear: walk more, however quickly you happen to do it.