Arm Muscles: Anatomy, Function, and How to Build Them 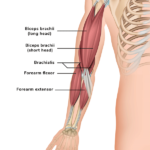 Nothing beats a great pair of arms. Abs and quads may be great for the beach, but if you spend time developing your arm muscles (biceps, triceps, and forearms) you can turn heads — even when you’re wearing a T-shirt, tank top, or Polo.

The muscles of your arms may seem fairly simple, but building them is about more than just curls and kickbacks. If you learn how these muscles work, you’ll know how to strengthen and build them better, so they look and perform at their best.

Bonus: Knowing the names of these muscles gives you additional tools for complimenting friends (“Hey, Pete, your coracobrachialis looks great today!”) and putting down enemies (“Gosh, Bob, you really have to work on your palmaris longus.”). As always, we’re here to help.

Here’s your primer on arm anatomy and function.

Get the best exercises to build your arms (and other muscles) with the workouts on Openfit! Sign up for free today.

What Are the Muscles of Your Arms?

There are four main muscles of your arms: biceps, triceps, forearm flexors, and forearm extensors. There are also a handful of other muscles that support these main four.

To locate them on your body, stand with your arm by your side and your palm rotated forward. When you look down at your arm, you see the anterior (front) side of your arm; opposite those muscles are the posterior (back) muscles.

The body’s anterior muscles tend to be the flexors — they pull your extremities inward, toward your center. So the biceps of the upper arms flex (bend) the elbow, and the forearm flexors on the inside of your forearms flex the wrist and fingers.

On the back of your arm are the extensor muscles, which perform the opposite function: pulling your extremities out and back. So the triceps extend (straighten) the elbow, and the forearm extensors extend the wrist and fingers.

Now, let’s get granular with the individual muscles of the arms. 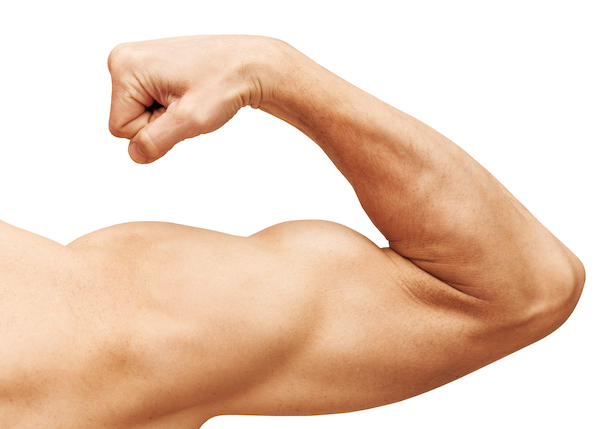 1. The Muscles of the Biceps

In the front of the upper arm is the iconic biceps muscle, officially known as the biceps brachii, which flexes your elbow joint. It’s far from your body’s most important muscle — it’s probably not even in the top 100 — but it’s certainly the showiest.

Although the biceps may look like a single lump of muscle, it’s actually comprised of two long sheaths, or heads: the short head and the long head. They originate at two points near the shoulder joint and come together to form one attachment point at the top of the forearm. This gives the muscle the look of a crunched-up letter V.

Together, the two heads of the biceps perform two major functions:

How do you build your biceps?

You strengthen and build your biceps whenever you perform pulling movements (pull-downs, pull-ups, or rows) with the palms facing upward. You also work them with curling movements, like dumbbell curls.

If you stand with your arms by your sides and your palms rotated forward, the biceps’ long head lies further from your torso. It originates from the superglenoid tubercle, the outermost bony point of your shoulder that lies beneath the deltoid muscle.

The biceps tendon cleaves between two lumps, or tuberosities, in the shoulder bones. This is called the bicepital groove, and it’s a common site of injury: With overuse, it can become inflamed.

The biceps’ short head originates at the coracoid process — a point on your shoulder blade that peeks over the top of your shoulder when seen from the front. You can stretch this tendon — and thus the biceps — by interlacing your hands behind your back, straightening your arms and squeezing your shoulder blades together.

About halfway down your upper arm, the two heads converge and terminate in a single tendon that attaches to the inside edge of the radius — the bone that runs along the thumb-side of your forearm. This is another common injury site in lifters doing heavy biceps work; you know you’ve torn this tendon when the biceps muscle bunches upward, like a window shade.

Underneath the biceps muscle lies the brachialis — a long, flat muscle that gives the biceps more shape and height. This is what makes the cool-looking ridges of muscle on the outside of the upper arm of a well-defined athlete.

The brachialis originates at the outside portion of the front of your upper arm, and attaches to the ulna bone of your forearm.

How do you build your brachialis?

Whenever you perform a pulling motion (like a row, pull-down, or pull-up) with your hands parallel, you’re emphasizing the brachialis. You can also focus in on the muscle with hammer dumbbell curls, where your hands are facing each other.

Also originating at the coracoid process, and running just inside the short head of the biceps, is a lesser-known muscle called the coracobrachialis. It attaches to the inside of the humerus bone and activates when you squeeze your upper arms down and in toward your torso (such as when you perform a dip exercise). Small, but important! 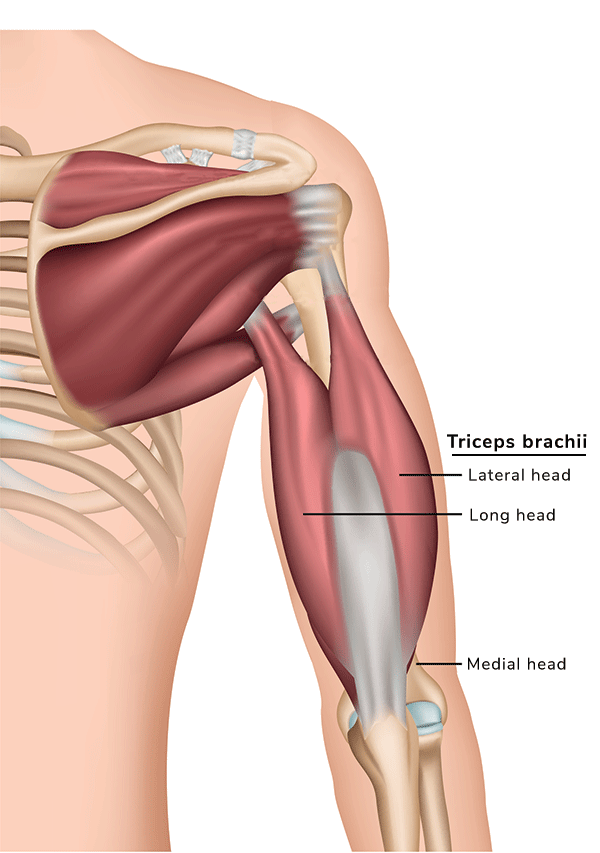 Each of the triceps’ three heads originates in a distinct location. Then, the heads converge, terminating in a single tendon which attaches to the olecranon — the end of your forearm’s ulna bone that forms the knobby point of your elbow.

The role of the triceps is opposite that of the biceps: It extends your arm at the elbow joint.

How do you build your triceps?

Any compound move where you extend your arm under load works the triceps. Think: overhead presses, bench presses, push-ups. You can also work them directly with triceps pushdowns, kickbacks, and lying and overhead triceps extensions.

As its name suggests, the triceps has three heads: the long, lateral, and medial.

The long head originates at the scapula (shoulder blade), and crosses both the shoulder and the elbow joint before terminating at the olecranon. Stretch this muscle by reaching your arm overhead and bending your elbow.

The lateral head of the triceps forms a comma-shaped notch on the outside of the back of your upper arm. In very muscular people, it looks like a croissant. The lateral head originates on the humerus and joins your other triceps heads about two-thirds of the way down your upper arm, before making its way to the elbow.

Like the biceps tendon, the lower triceps tendon can rupture at the elbow. If this happens, the triceps may bunch up toward the shoulder, and straightening the arm will be difficult or impossible. 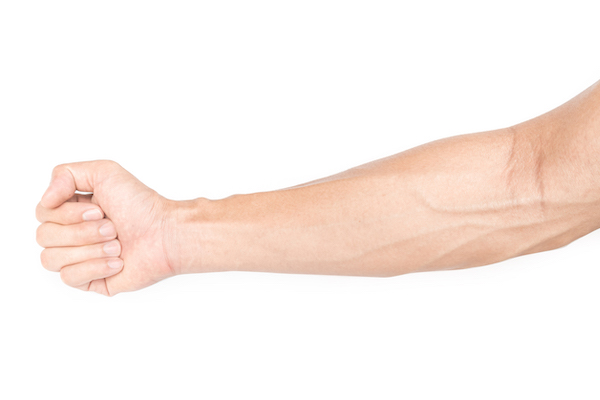 Like the upper arm muscles, the forearm muscles can be divided into two parts:

Standing with your arms at your side and palms forward, you see the elbow knob that’s closest to your body — also known as the funny bone — which is where these muscles start.

This a common site of injury: “Golfer’s elbow” or inflammation in that bony protrusion occurs when you overwork the flexor muscles.

As a group, the forearm flexors on the insides of your arms flex your wrist forward and turn your hand from a palms-up position to a palms-down postion.

How do you build your forearm flexors?

You work your forearm flexors whenever you do an exercise that challenges the grip: pull-ups, rows, farmer’s walks, curls, or grip and hold anything heavy. To further focus on these muscles, climb and hang from monkey bars, squeeze a tennis ball or racquetball, perform wrist curls, or work with a spring-loaded gripper.

Three layers of muscle make up the forearm flexor group: The superficial group, originating at the funny bone, consists of the flexor carpi ulnaris, the palmaris longus, the flexor carpi radialis, and the pronator teres. All four of these muscles are long and cable-like and cooperate to flex and pronate the wrist.

Beneath this superficial layer of muscles on the front of your forearm are several other muscles, which work together to articulate your fingers and thumb. The main one, the flexor digitorum superficialis, tapers into four small tendons which pass through the carpal tunnel — the space beneath the band of tissue along the base of your palm. Then, another layer runs up your palm and attaches to your fingers to help them flex at the first two joints. 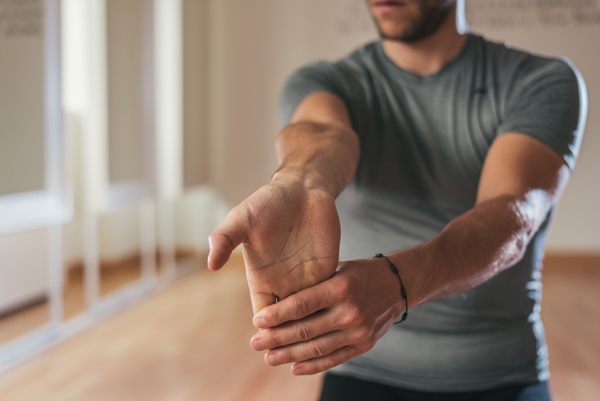 To find these bad boys, stand again with your palms forward — the point of origin for the forearm extensors will be the outermost knob on the elbow. With overuse, this point of attachment can become inflamed, leading to a condition called lateral epicondylitis, or “tennis elbow.”

These muscles extend your wrist, fingers, and thumb, and also aid in supinating the wrist (turning it palm-up).

How do you build your forearm extensors?

Your forearm extensors see a lot of action when you perform curls, rows, and pull-ups with an underhand grip. To work them directly, try wrist extensions using a light dumbbell,

If you’re truly obsessive, you can draw your fingertips together, wrap a tight rubber band around them, and extend your fingers against the force of the band pulling them together.

Like the muscles on the inside of your forearm, the extensors are long and cable-like, running lengthwise along your forearm and attaching at the fingers. The largest of these muscles is the brachioradialis: Unlike your other forearm muscles, it originates at the upper arm and attaches on the outside of your wrist, and aids in bending your elbow, thus making it a flexor (like the biceps) rather than an extensor (like the other muscles around it).

Think that’s it for the Latin names? There are literally dozens more in the forearm. The fingers and thumb, of course, are capable of all manner of subtle, intricate movement, not least due to the many neural and muscular superhighways running in and out of them. We’ve covered the major players, but for dedicated anatomists, there’s plenty more to study.

Strong back and biceps can be a huge help in your daily life. Here are 10 of the best moves to add to your ...

Add stability to an exercise and you can move more weight. And more weight moved means more muscle gained,...