6 Sneaky Sources of Salt in Your Diet

Pop quiz: Is there too much salt in your diet or just enough?

Answer: Probably too much. Americans eat an average of 3,300 milligrams of sodium a day; the recommended limit is 2,300 milligrams.

Salt comes from more than just the shaker on your kitchen table. It lurks in a lot of unexpected foods that you eat every day — a staggering 75 percent of salt in the American diet comes from processed and restaurant foods.

Is Salt Bad for You?

Salt isn’t all bad. It provides the majority of your dietary sodium, which helps regulate your blood pressure. Sodium and chloride, the components of table salt, also allow for proper muscle nerve and function, and they are two electrolytes lost in sweat, so athletes exercising in the heat may need to add extra salt to their diet to prevent dehydration and muscle cramps.

It’s important to note that everyone responds to dietary sodium differently, and that response depends on a variety of genetic and lifestyle factors. Research shows that some people display large changes in blood pressure in response to high salt intake (salt sensitive), while others have almost no change in blood pressure at all (salt resistant).

But for most people, high salt intake is linked to high blood pressure, or hypertension, which can be a risk factor for cardiovascular complications and strokes.

Cutting back on salt isn’t the only way to reduce the effects of high sodium — you can also eat more foods that are high in potassium, like bananas, sweet potatoes, and mushrooms. Potassium is the natural counterpart to sodium and it can blunt the negative effects of high salt intake.

This list will help you uncover sneaky sources of salt in your diet, and provide quick tips on ways to eat your favorite foods — without all the sodium. 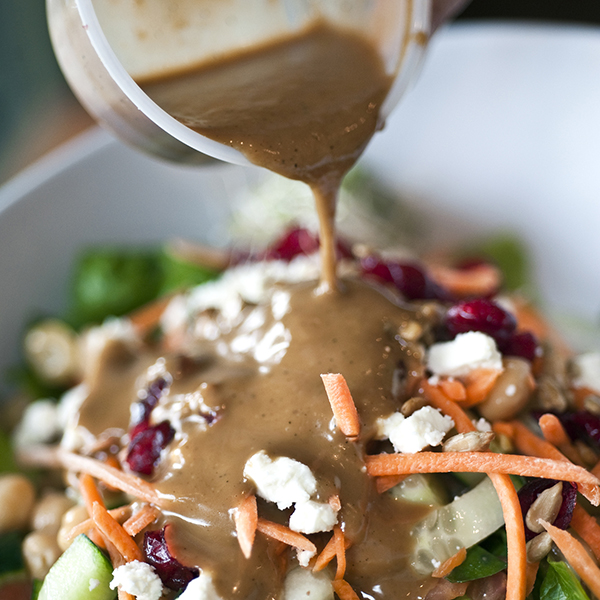 Store-bought marinades, salad dressings, pasta sauce can be loaded with sodium. Just two tablespoons of your favorite BBQ sauce could contain up to 20 percent of your recommended daily sodium intake. To cut back, prepare your own sauces, marinades, and salad dressings at home using ingredients such as olive oil, balsamic vinaigrette, ground pepper and lemon juice. Season with fresh herbs and spices for flavorings. (Pro tip: Keep your pantry stocked with these 8 essential spices.)

Between the two slices of bread, processed deli meat, cheese, and condiments — all of which are high in sodium — a sandwich can pack a hefty load of salt. Swap a lettuce leaf in for bread, and use fresh vegetables, Swiss cheese, and low-sodium deli meats to cut down the salt load of your next sammie. Also, try substituting mashed avocado for mayonnaise and mustard to slash even more sodium. (Pro tip: Learn how to make a healthy sandwich like a boss.)

Many processed breads are high in salt, but bagels pack an especially large load of sodium. A plain large bagel has 443 mg of sodium, or 19 percent of your daily recommended intake. Spreading one ounce of cream cheese on top adds nearly another 100 mg. Replace your morning bagel with a slice of whole wheat bread to cut back on salt content.

Your favorite soups (canned or from a restaurant) can contain extremely high levels of sodium. Just one cup of canned chicken noodle soup contains 33 percent of your daily recommended sodium intake and a serving of chicken-flavored ramen contains 836 milligrams of sodium, or 36 percent of your daily recommended intake — and there’s two servings per package! To cut back on sodium intake, prepare homemade soup with low sodium or diluted broth and vegetables like potatoes, carrots, and mushrooms for an added dose of potassium.

Cheeses are oh so yummy but contain a sneaky amount of sodium, if you’re not watching your portions. Example: Cottage cheese is packed with calcium, potassium, and protein, but a cup of cottage cheese has nearly 800 milligrams of sodium. While cheese can be part of a balanced diet, for people watching their sodium intake, try reduced-sodium cheese and consume a bit less.

Nuts are good for you, but if they’re salted they can be a source of high sodium. Check the labels and choose raw or unsalted dry roasted nuts.

Easy Ways to Cut Back on Salt in Your Diet

Go homemade: Whenever possible, make food at home using whole ingredients, rather than buying pre-made, packaged, or processed foods. Instead of salt, experiment with spices and herbs to add flavor.

The fresher, the better: Shop on the outside aisles of the grocery store… that’s where all the freshest, less-processed foods hang out. Fill your basket with fresh food rather than canned, frozen, or pre-cooked fruits and vegetables.

Read labels carefully: All nutrition labels list sodium and potassium content in milligrams, as well as the daily percentage of intake for each. The recommended daily intake of sodium is less than 2,400 milligrams per day. According to the FDA, the “% Daily Value” for sodium should be between 5 percent and 20 percent. Remember: These values are for one serving, and it’s easy to eat more than one serving of food, especially of sauces and other condiments.

With a little research and some simple swaps, it’s easy to keep your salt intake at recommended levels and still enjoy flavorful, tasty food!

Kristina LaRue, R.D.N., C.S.S.D., is a board certified sports dietitian and author of healthy living blog, Love and Zest. She works with companies to develop healthy recipes and professional food photography and inspires her nutrition clients to eat well through her e-coaching services. Follow her on Twitter.