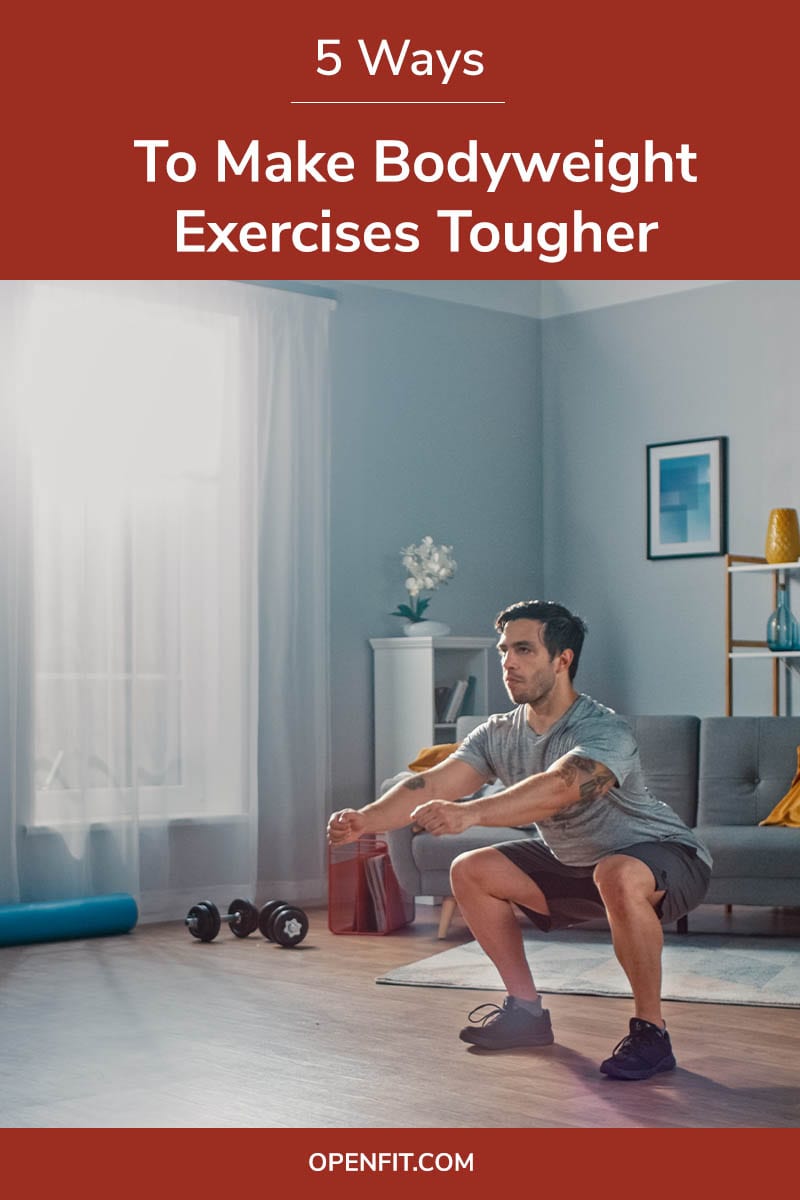 For many barbell-and-dumbbell devotees, bodyweight exercises are bush league: Novice exercises you quickly abandon in favor of those involving iron. But bodyweight squats, push-ups, lunges, jumps, and other moves aren’t just for beginners.

Smart trainers know that using your body as your barbell can build just as much muscle — and burn just as much fat — as pumping iron.

Don’t believe us? Talk to a gymnast, soldier, or even a convict, many of whom sculpt cover-model worthy physiques without ever lifting a weight.

“Being able to control your body weight is key for building fitness,” says Craig Rasmussen, C.S.C.S., training department manager at Results Fitness, in California. “It’s the foundation for every type of athletic and strength endeavor.”

At first glance, bodyweight exercises might still appear to have one major drawback compared to free weights and machines: You can’t easily adjust the load. On the bench, you can strip or add plates. On a cable machine, all you have to do is move a pin. If you’re performing curls, you can simply grab a heavier pair of dumbbells. But if you can’t do a push-up, you just can’t do a push-up, right?

Wrong. External load is only one variable (and arguably not even the most important one) that you can manipulate to change the intensity and difficulty of an exercise. Read on for five more.

Armed with the following tips, you can stop relegating bodyweight exercises to something you do when you don’t have access to iron, and start utilizing them as elite trainers do: As powerful tools for achieving nearly any fitness goal.

For moves like push-ups and inverted rows, the difficulty of the exercise depends on the angle of your body to the ground: The higher your feet are relative to your head, the lower your mechanical advantage is, and the harder the exercise becomes.

So if you can bang out more than 15 classic push-ups at a time, try elevating your feet on a box or bench. Ditto for inverted rows, which are normally performed with your heels on the ground.

If you find the classic move too tough, place your hands on a raised surface. If you struggle with inverted rows, walk your feet backward a few steps.

In both cases, the greater incline of your body will increase your mechanical advantage, making the exercises less difficult.

If you really want to challenge yourself, add a pause at the most difficult point of the move (usually when the target muscle is fully stretched). “I might have a client hold the bottom of a squat or a push-up for a two-count,” says Rasmussen. “It’s simple, but it’s very challenging.”

That pause eliminates the stretch reflex (the tendency of a muscle to spring back to a shortened state). Without help from that fleeting elastic energy, defying gravity becomes much more difficult.

Bodyweight Exercise Tip No. 3: Increase Your Range of Motion

Muscles are weakest at the end of their ranges of motion (i.e., when they’re fully stretched), so the more you work them in that end range, the more strength you’ll build.

Rasmussen’s advice: “Pulse in and out of that end range three times before returning to the top of the rep [i.e. starting position],” he says. “If you do that, you’ll quickly see there’s no need for a barbell.”

Conversely, you can make most exercises easier by initially reducing the range of motion, and then gradually increasing it as you become stronger. “If you don’t have the strength or mobility to perform a deep squat, do a partial squat — unassisted or onto a box,” says Rasmussen. “Then gradually squat onto lower and lower boxes until you’re able to go all the way down unassisted.” This partial rep strategy also works with push-ups, lunges, and rows.

Bodyweight Exercise Tip No. 4: Destabilize Yourself

A few years ago, it was trendy to perform exercises like squats and barbell presses on Bosu and Swiss balls. Fortunately for everyone, that fad faded rather quickly (the safety risks outweigh the potential benefits).

But the theory behind it is sound: “The smaller [or more unstable] your base of support, the tougher it will be to balance, and the harder the exercise will become,” says Rasmussen. The result: More strength in less time.

Simply moving your feet closer together during a squat will do the trick. Another (tougher) option is to reduce your ground contact by lifting one or more limbs. But choose which limb you lift wisely — keeping one leg raised as you perform the push-up is hard, but keeping one hand raised (i.e. performing a single arm push-up) is a true test of strength. So is the pistol squat, which is performed on one leg with the other one held off the ground in front of you.

“You can work up to a single arm push-up just like you would for a classic push-up,” says Rasmussen. “Gradually work your way down from an elevated surface.” For the pistol squat, place one or both hands on a pole or other steady object until you can perform the move without any support.

“The more muscles you work, the more joints you engage, and the more planes of motion you move through, the more difficult the exercise becomes,” says Trevor Thieme. C.S.C.S., and Openfit’s senior fitness and nutrition content manager.

Added bonus: Combining bodyweight movements instantly increases your exercise arsenal, amplifying the variety you can bring to each workout. “And variety is one of the most important elements in any training program,” says Thieme. “Your goal is to never stop adapting, and the best way to do that is to regularly switch up your training stimulus.”

Pairing bodyweight exercises will do just that. So will following the other tips in this article.

Work Your Entire Backside With the Kettlebell Swing

The kettlebell swing is a compound exercise that can work your entire backside. Check out our tips on how t...

Work Your Back, Shoulders, and More With the Kettlebell Row

A kettlebell is a great piece of fitness equipment that allows you to do a lot of exercises. Learn how to d...

The Legend of Arnold Schwarzenegger’s Insane 3 AM Workouts

Could you survive a 3 AM Arnold Schwarzenegger workout? Arnold talks about the habits that helped him build...

6 Hamstring Exercises You Should Add To Your Workout Routine

Here are some of the best hamstring exercises for building strength, muscle mass, and more balanced legs. A...