10 Ways to Work Dance Into Your Workouts

Dance is arguably the most popular form of exercise in the world. We do it to celebrate, to mourn, to mate, to express ourselves, and, most importantly, to get on reality television. Not only is it one of those magic workouts that doesn’t feel like a workout, but this successive group of rhythmic steps usually set to music is a major calorie burner. It stimulates coordination, stamina, and cardiovascular conditioning, and it builds muscles. It’s time to think of dances as dance workouts.

The average 130-pound woman can burn more than 300 calories doing an hour of ballet. But if pink tights and pirouettes aren’t your thing, there are dance styles to meet every skill level and interest, from pole dancing to dangling from a piece of material attached to the ceiling. Which form is right for you? Let’s look at some options.

Get body-sculpting, cardio-infused dance workouts with Openfit’s Xtend Barre or Rough Around the Edges programs! 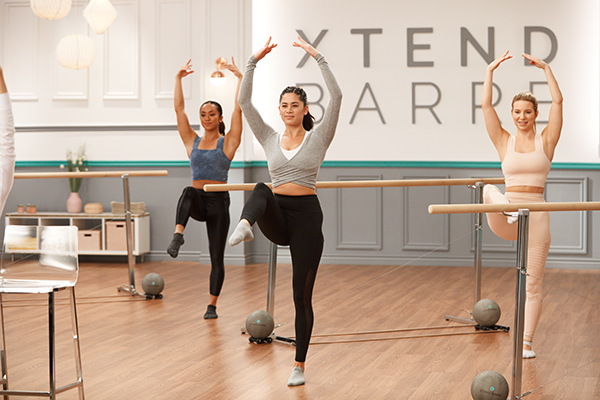 Ballet is considered the basis of most dance disciplines. It was first introduced in 1581 as a form of entertainment in the European courts and has evolved into the most strenuous of all performing arts. Ballet classes are usually divided into two parts, the first of which involves holding onto a bar that is attached to the wall. This is where you get a lot of the benefits of placement, core work, and muscle building. The rest of the class is usually completed in the center of the room, where you get the cardiovascular benefits as well as coordination and stamina.

Get a dynamic mix of ballet fundamentals, cardio, and even Pilates in Openfit’s Xtend Barre program. Trainer Andrea Rogers will guide you step-by-step through power-packed, 15 to 30 minute workouts that combine the body-shaping benefits of a traditional barre routine with a fat-blasting calorie burn.

Jazz is a form of dance that is often difficult to define because so many styles fall under this category. The style seems to have emerged in the late 1800s, and until the 1950s, it included the cakewalk, the jitterbug, African-American vernacular dance, and the Charleston. With the emergence of Broadway, the now smooth style of jazz dance came into being. And still, there are endless types of jazz dance, all of which are amazing forms of exercise.

Because jazz is fast-paced, high-energy movement, you will burn numerous calories, increase your flexibility and stamina, and shape your thighs and butt better than any ThighMaster will. Classes for people of all ages and skill levels can be found at studios, community centers, and universities. 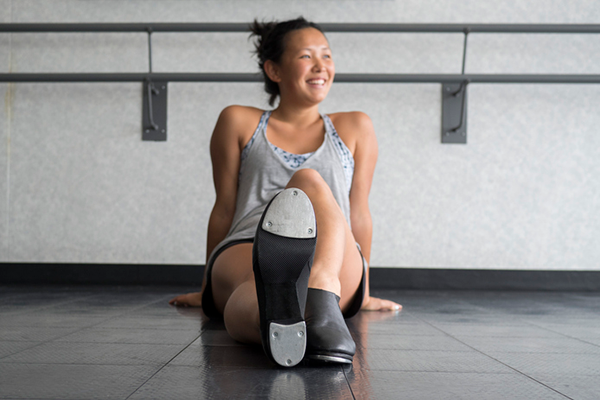 While being incredibly intricate, tap dance seems to be one of the easiest forms of dance for an adult to learn. Tap is creating music with your feet, and anyone with a sense of rhythm and loose ankles can become proficient with enough practice. The downside of tap is that because it is so detailed, the smaller movements can mean that you burn fewer calories. Still, the ability to move like Gene Kelly can well compensate for the fact that you might still need a  few hip hop classes to shed the pounds.

Although based in ballet, contemporary and modern dance styles were a direct rebellion against the rigid discipline and rules of ballet. Contemporary and modern dance are concerned with expression yet still require a degree of technical proficiency that often means years of practice. The focus of most forms of contemporary dance is the “center,” or your core, which means that you will easily work on and strengthen your stomach and back muscles. These forms of dance are readily found in the university system but can also be found at dance studios. 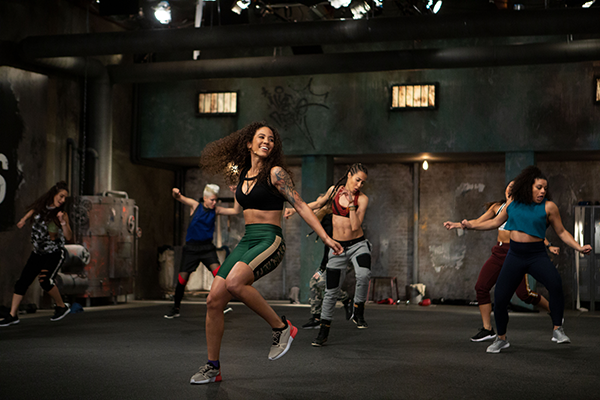 Hip hop dancing started in the early 1970s, with its roots in break dancing and popping and locking. As hip hop music evolved in the 1980s, so did the many styles of street dancing that we call hip hop today. Hip hop is fun, high energy, and often set to popular music. Hip hop also works your core, which is why it can be so effective. Classes can be found all over the place, including gyms, dance studios, and even through park and recreation departments.

Openfit’s Rough Around the Edges program offers unconventional, yet challenging workouts that’ll help you break a sweat while having fun. Led by six women who are professional dancers, stuntwomen, and martial artists, this program is for anyone who wants to get strong, fit, and badass.

Ballroom and Latin dance styles have been around for as long as people have danced in Europe and South America, but they’ve become widely popular in the U.S. in the last century, thanks to Fred Astaire, Arthur Murray, and Dancing with the Stars. Ballroom dance styles are particularly enjoyable as they are done with a partner, and you only need a few hours to learn some of the most basic steps.

Because of its low-impact nature, ballroom dancing is appropriate for all age groups, does not require extreme flexibility, and can range from a slow waltz to a boppin’ Texas two-step to a fast West Coast swing. What’s more, while you’re shedding pounds, you’re preparing for your cousin’s wedding, your class reunion, and possibly an inauguration ball. Talk about motivation. 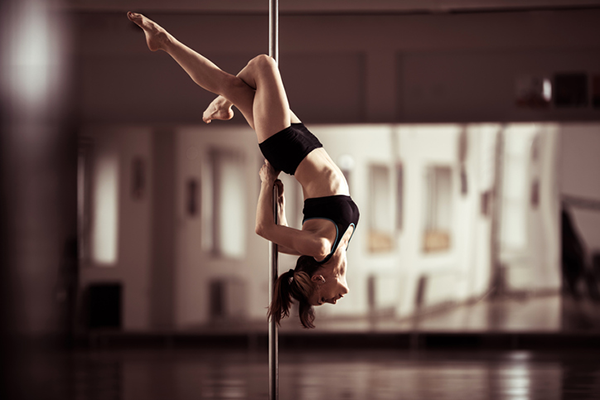 Alternative dance styles, or PG-13 classes, include pole dancing, stripteasing, and burlesque dancing. As these new expressions of movement become more mainstream, everyone from the sorority girl to the grandmother is giving them a shot. Besides the obvious advantage to learning these dance styles, the upper-body strength required for dancing on a pole is rather amazing. What’s more is that these adult dance styles not only move you toward having a fitter body, but even before getting that fitter body, many women gain self-confidence.

Tissue dancing is a form of aerial acrobatics that is often seen in circus-style shows like Cirque du Soleil. Remember 10th-grade gym class and climbing the rope? Now imagine wrapping yourself up in the rope, hanging upside down like a bat, and quickly unraveling yourself until you almost hit the floor. This, and hundreds of other tricks, is done with a very strong piece of material hung from the ceiling and very daring participants who are willing to be sore for many days following the class.

There is a huge emphasis on upper-body strength, flexibility, and core in tissue dancing. Classes are readily available in most metropolitan cities, and workshops are offered through many companies that travel nationwide. 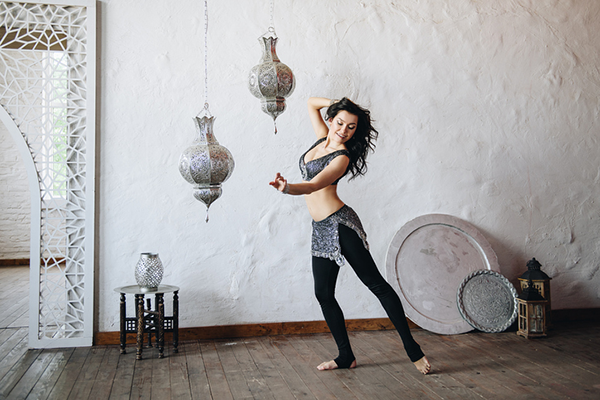 Belly dancing, or Middle Eastern-style dancing, can be traced back to the 12th century, but its exact origin is a giant controversy. Some believe it has religious origins, others think that it was a part of childbirth, and still more fight over it whether it originated in Egypt, Africa, or Greece.

In the Middle East, it’s taught to both boys and girls very casually, and it’s become increasingly popular in the U.S. in the last 20 years. Belly dancing requires great control of the stomach muscles and the ability to move different parts of the body while isolating and holding others still. As a quick note, belly dancing tends to favor curves, so if you’re a woman who prefers to bask in the glory of her natural lines, this is the perfect art form for you.

Each culture has held on to a piece of its history by imparting the dances of its ancestors to its young. Just as each cultural dance is completely different, so is the amount of calories you might expend or the different muscle groups that might get stimulated. For instance, Irish stepping or Bollywood dancing might be the equivalent of running 5 miles, while Japanese fan dancing might be more akin to doing laundry. Regardless, if the style of dance is meaningful to you, and you are exercising, the fact that you are moving is the most important thing!

Find the type of folk dance that interests you and also the kind of music that you enjoy. I spent an afternoon at a Highland dance competition, and after seven hours of bagpipe music, I was ready to remove my ears. Now I’m having fun line dancing, which combines simple moves and country music that burn fat and tone your body.

There is a world of dance options out there that can be fun and also help create the body of your dreams. As with all new forms of exercise, do the research and find a qualified instructor, class, or video series before you begin your journey. And if the class option is not for you, go find a dance floor in a local bar or blast the stereo in your living room, and just start dancing. Because if you think you can dance, really, you can.